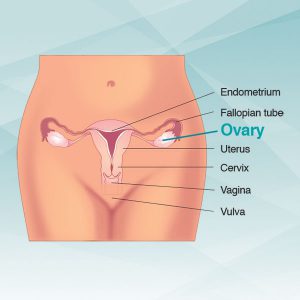 What is ovarian cancer?

When cancer starts in the ovaries, it is called ovarian cancer. Women have two ovaries that are located in the pelvis, one on each side of the uterus. The ovaries make female hormones and produce eggs.

Who gets ovarian cancer?

Each year, approximately 19,880 women in the United States get ovarian cancer.

What are the signs and symptoms of ovarian cancer?

Ovarian cancer may cause the following signs and symptoms:

There are two very rare types of gynecologic cancer that are similar to ovarian cancer:

Fallopian tube cancer starts in the fallopian tubes, the tubes where eggs pass from the ovaries to the uterus.

Primary peritoneal cancer starts in the peritoneum, the tissue lining that covers the organs in the abdomen.

What raises a woman’s chance of getting ovarian cancer?

There is no way to know if you will get ovarian cancer. However, there are several factors that may increase the chance that you will get it, including if you:

In addition, some studies suggest that women who take estrogen by itself (estrogen without progesterone) for 10 or more years may have an increased risk of ovarian cancer.

If one or more of these is true for you, it does not mean you will get ovarian cancer. But you should talk to a doctor about your risk.

How can I help prevent or lower my chance of getting ovarian cancer?

There is no known way to prevent ovarian cancer. But these things are associated with a lower chance of getting it:

Are there ways to find ovarian cancer early?

Currently there is no effective screening test for ovarian cancer, and it can be very hard to identify ovarian cancer early. The signs and symptoms of ovarian cancer are not always clear and may be hard to recognize.

The Pap test does not screen for ovarian cancer. The only cancer the Pap test screens for is cervical cancer. That is why it is so important to pay attention to your body and know what is normal for you. If you notice any changes in your body that last for two weeks or longer and may be a sign or symptom of ovarian cancer, talk to a doctor and ask about possible causes.

Rectovaginal pelvic exams, transvaginal ultrasounds, and CA-125 blood tests can be used in combination to help diagnose ovarian cancer. Ask a doctor about these tests, if:

When ovarian cancer is found early, treatment can be most effective.

Should I have a genetic test for ovarian cancer?

Genetic testing can help some women find out if they have an increased chance of developing breast and ovarian cancer. It works by finding changes or alterations in genes known as breast cancer susceptibility
genes 1 and 2 (BRCA1 and BRCA2).

If you are considering genetic testing, you should get genetic counseling to help you decide whether to get tested, and to learn what the test results may mean for you.

If the following is true for you, you may benefit from genetic counseling and testing:

You have an Eastern European (Ashkenazi) Jewish background, and on your mother’s or father’s side you have one of the following:

You do not have an Eastern European (Ashkenazi) Jewish background, but on your mother’s or father’s side you have one of the following:

SOURCE: Centers for Disease Control and Prevention’s (CDC) Inside Knowledge: Get the Facts About Gynecologic Cancer campaign

View More Posts from this Category

Learn about the types of gynecologic cancers and their symptoms