Out of the 22,240 women in the United States who are diagnosed with ovarian cancer every year, only about 47 percent survive longer than five years.

But Dr. Beth Karlan, the newly appointed director of cancer population genetics at UCLA’s Jonsson Comprehensive Cancer Center, is hopeful that her research will not only help women get diagnosed with ovarian cancer at an earlier stage, but also identify the women who are most at-risk so they can intervene before the cancer even develops. 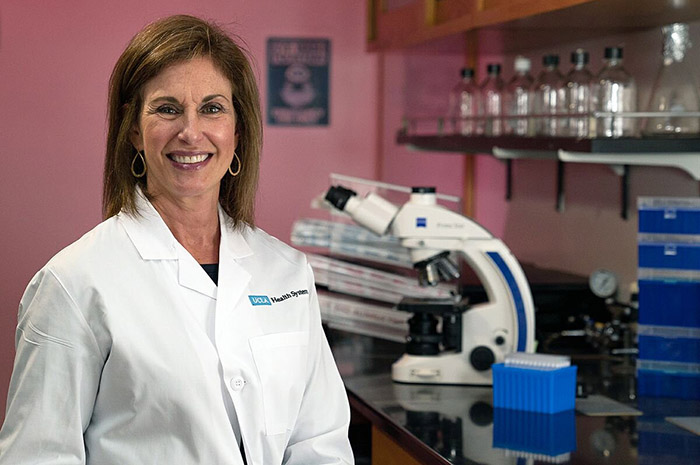 In this interview, Karlan, who is also the vice chair of women’s health research in the obstetrics and gynecology department in the David Geffen School of Medicine at UCLA, talks about the role of being both a physician and scientist and why genetics is an important key to early detection.

What are the benefits of being both a physician and scientist?

I walk on both sides. I hold patients’ hands and provide clinical care, and then go to the lab to unravel the problems. My patients help me stay focused, to figure out which questions are the most urgent and need to be answered quickly. I operate on many, many women with ovarian cancer. And I’ve always been struck with how on different days I can do the same surgery on two or three women, and one woman lives only two years, and another one is lucky enough to live 20 years. We do our best to remove cancerous tumors, but at times, they can have a mind of their own. In the laboratory however, we can very much control what happens in an animal model and in a petri dish. We are beginning to understand why some folks live longer than others, why some respond to treatments better than others, why people have more toxicities, and how the treatments can have a negative impact on them. And I think our opportunity to go bedside to bench and back again, and that iterative process really helps us have a leading role in advancing new treatments that can improve the lives of cancer patients.

What inspired you to devote your life to studying cancer?

My interest in studying women with ovarian cancer and hereditary cancer probably came from a challenge to me from a patient early in my career. It was a young woman not much older than myself at the time, who in a sort-of-frustrated voice asked me, “What right did you have to be healthy and able to be pursuing your dreams, when I am in bed fighting ovarian cancer and undergoing chemotherapy?”

It was a question that I did not take lightly. None of us have a right to our good health. But I really did want to try to understand why some people were at risk. I saw in her and in so many other women the willingness to do anything they could to go on living. And it really made me want to be part of their team, to be by their side, to fight for them, through both science and laboratory research, through clinical care and clinical trials, and also through advocacy in public education.

What are you most excited for in your new positions here at UCLA?

Being at a world-class university with incredible colleagues really gets me going every day. I get an idea at night, and I know I can come into work, bounce it off a friend, a colleague, find someone else, call a meeting, and all of a sudden, there’s a team of experts. And I think it’s the diversity of input, bringing together people from different specialties, different scientific backgrounds, schools of public health, whatever, all of the expertise here on campus, and forming groups that are committed to develop solutions. Those “aha” moments inspire you day after day.

For more than 40 years, ovarian cancer treatments—including surgery followed by chemotherapy—have remained largely the same. Why is that?

Until recently, we really have not understood ovarian cancer. We use the term ovarian cancer, but what we know today is that the majority of ovarian cancers don’t even begin in the ovary. We couldn’t find a way to identify ovarian cancers early, because we weren’t really looking at the right place. And without a means of early detection, it’s been a very, very difficult disease to cure. Most ovarian cancers have very, very vague symptoms that are often harmless and cause no significant discomfort so women often don’t go to the doctor until the tumors have spread widely. Most women will often have symptoms for six to nine months before they even see a doctor, and get the correct diagnosis.

Ovarian cancer is very curable when it’s found at an early stage—when found at stage 1, before it spreads outside of the ovaries, it’s nearly 90% curable. But without specific symptoms and no reliable screening test, discovering ovarian cancer at stage 1 is often by serendipity. A woman is having surgery for something else and they see a small tumor on the ovary, or it’s discovered when they’re having an exam or other medical tests. It’s found most often by a CT scan done for abdominal bloating—ordered by their PCP or in an emergency room after a car accident. They tend to be almost asymptomatic when they’re still at the most curable stage.

What is your research focus?

For so long the focus of my research has been early detection, to find ways to find ovarian cancer, and diagnose ovarian cancer before it has spread and is still very curable. My laboratory is studying genetics and finding ways to locate patients who are at highest risk, so we can intervene even before the cancer develops, and they never have to even have cancer as part of their history.

What do you enjoy most about being in this field?

I find caring for women with cancer is really inspirational. Women’s ability to multitask, care for themselves while they’re caring for families, absolutely astounds me sometimes. And I really do feel that privilege to be at their side, and helping them live the best life they can. On the days that I’m in the clinic seeing patients, there’s nothing more special than being a physician. We don’t walk in their shoes. But if we can walk alongside them shoulder to shoulder as they are going through their cancer experience, I believe we can help them have better survival and survivorship in every day that they get to live. And through research, we both share in the quest for new answers and find hope for future cures.