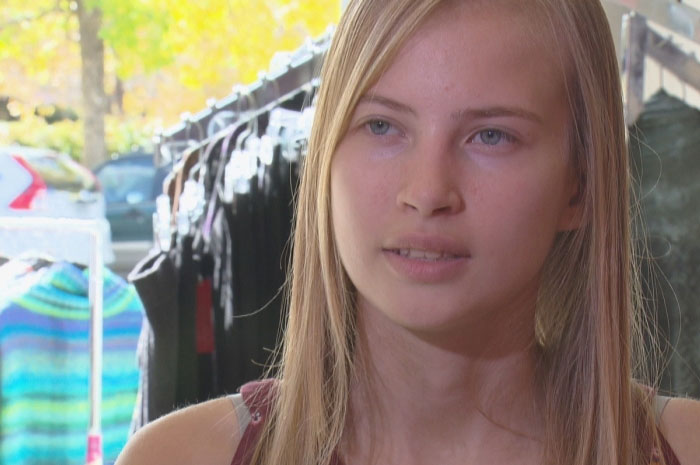 AURORA, Colo. (CBS4)– A Colorado teenager is fighting a disease that usually strikes women four times her age. Her doctor at the University of Colorado Hospital believes Peyton Linafelter may be the youngest woman in the United States to develop the most common form of ovarian cancer.

Dr. Saketh Guntupalli says the 16-year-old has one of the worst cases of cancer he’s ever seen, but she also has the strength and resilience to beat it.

On a Tuesday in October, Linafelter is getting special treatment at a women’s knitwear boutique in Boulder.

“I want to introduce you to my team. They are so excited to meet you,” said Rhonda Swenson, founder and owner of Krimson Klover.

Linafelter is a celebrity in the knitwear shop. She has become their cause.

“I can’t even fathom what she’s going through,” said Swenson.

At 15, Linafelter was learning to drive and making a run at modeling. She started feeling severe back and abdominal pain. The explanation she was given was cysts on her ovaries.

But the Littleton High School student got worse.

“My stomach started expanding, so I looked like I was five months pregnant, ” Linafelter told CBS4 Health Specialist Kathy Walsh.

On her sixteenth birthday, Linafelter learned she had Stage IV ovariancancer. It was in her lungs and all through her abdomen.

“I was in disbelief. I didn’t think it was. I was like, that can’t be right,” she said.

“This is all cancer. All that white should not be there. That’s an actual tumor, ” Dr. Guntupalli said, pointing to Linafelter’s CT scan.

The Gynecologic Oncologist at UCH calls Linafelter a medicalmystery. He said the average age of women diagnosed with this type of cancer is 60-years-old.

“She may arguably be the youngest, or certainly one of the youngest, patients in the U.S. diagnosed with this disease,” said Guntupalli.

At UCH, Linafelter has had six rounds of chemotherapy and a seven-hoursurgery to remove the tumors. Guntupalli says they are almost completely gone.

Linafelter will need more chemo, but she stays positive. She doesn’t want pity.

“I’m strong enough not to be beat down by sorrow,” she said.

Swenson will be donating 10 percent of Krimson Klover’s October sales to Linafelter.

“If we can help take some of the pressure off, it’s a wonderful thing,” said Swenson.

The “Teal Gala” for the Colorado Ovarian Cancer Alliance is Wednesday, October 19th to raise money and awareness for patients. Tickets can be purchased online www.COCA.com.

A GoFundMe page has been set up for Peyton Linafelter.

Source: Kathy Walsh is CBS4’s Weekend Anchor and Health Specialist. She has been with CBS4 for more than 30 years. She is always open to story ideas. Follow Kathy on Twitter @WalshCBS4.