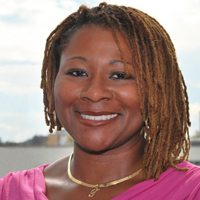 I’m trying to get the most out of life and make a difference where I can. I was a first-generation college student who wanted to help other first-generation college students understand that education is the great equalizer. So, for over 20 years I worked in higher education as an administrator. I had a wonderful career which provided me with addresses in seven different states and allowed me to travel to five different countries. But I gave it up for love, and returned to my native Illinois last year.

I had no symptoms, or didn’t realize it was a symptom until after the fact, and only went to the doctor because I was annoyed. I had what I thought was an infected ingrown hair bump on my vulva. I get them often, but this stubborn bump was different. It wasn’t red or inflamed, and it didn’t hurt. I couldn’t actually see the ingrown hair, but what else could it have been? It was big and hard and round, much like a wart. I thought that it had to be an infected hair bump. I really thought nothing of it and only called my doctor to have it removed after a month of trying to figure out how to “pop” it.

It was almost six weeks before I was able to get in to see my gynecologist for a non-emergency visit. He said, “hmm… well, this is an interesting looking bump. Why don’t we send it for a biopsy, just to see if the infection needs treatment?” I thought, “Sure, whatever,” still not fully realizing what was going on. A week later, my doctor called and told me that the results were quite surprising but nothing that I should be worried about. He said I had “a little bit of cancer, kind of like a skin cancer” and that we needed to schedule an outpatient procedure to have it removed.

Still, I heard the word “cancer” and kept trying to figure out what a “little bit of cancer” should feel like. I had been going to my gynecologist for six years, so his casual attitude reassured me that there was nothing to worry about.

We scheduled the surgery (called a wide lateral excision) for a month from the date of my diagnosis, and I went about my business. On June 25, 2010, four days after the procedure, my doctor called and said I needed to see a gynecologic oncologist because the cancer “was a little deeper than [he] anticipated” and he wasn’t sure he got it all.

Now I panicked. I told myself, “Come on, Teresa. You have a Ph.D. Find out what’s going on.” I asked for more details: What was the exact name of the cancer? What did he mean when he said he didn’t get it all? Who is the best gynecologic oncologist in the area?

A month later I was scheduled for a second wide lateral excision and a node dissection. The gynecologic oncologist told me that because the cancer was more than 2.5 cm, it had probably spread to my lymph nodes, and I should be prepared after the node dissection to undergo radiation and chemotherapy as soon as possible. He also told me that vulvar cancer, though on the rise, is extremely rare, especially for 40 year-old black women, and that if not caught and treated aggressively early, the long-term prognosis would not be good.

I went into the surgery prepared for the worst, so I was thrilled when I learned the cancer had not spread to my lymph nodes, and with regular follow-ups and screenings, the long-term prognosis is good.

My cancer was caused by a virus that I contracted at least 15 years before. I don’t recall anyone ever saying anything to me about HPV (human papillomavirus) when I was growing up and had no idea that the virus, which usually is harmless, isn’t always eliminated from the body. And black women seem to have a harder time fighting it.

So, I would have to say that I’ve become pro-HPV vaccination and often counsel young girls and their parents to get the vaccine to avoid my fate. Sure, I’m cancer-free now, but every time I get checked, I am anxious about what the tests will reveal. Because the virus still lives within me, I never know if I’ll ever hear those dreaded words again.

Vulvar cancer might manifest in a way that causes shame, because you could conclude that you have an STD (sexually transmitted disease) and not want to get that embarrassing news. But I’d much rather be embarrassed and alive than modest and dead. Early detection is key. And if you have children who are preteens or teens, please get them vaccinated against HPV.

Source: Division of Cancer Prevention and Control, Centers for Disease Control and Prevention