In the battle against ovarian cancer, UNC School of Medicine researchers have created the first mouse model of the worst form of the disease and found a potential route to better treatments and much-needed diagnostic screens. 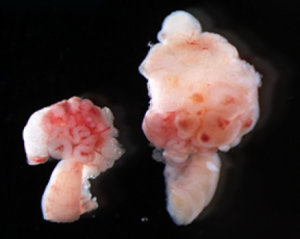 Led by Terry Magnuson, PhD, the Sarah Graham Kenan Professor and chair of the department of genetics, a team of UNC genetics researchers discovered how two genes interact to trigger cancer and then spur on its development.

“It’s an extremely aggressive model of the disease, which is how this form of ovarian cancer presents in women,” said Magnuson, who is also a member of the UNC Lineberger Comprehensive Cancer Center. Not all mouse models of human diseases provide accurate depictions of the human condition. Magnuson’s mouse model, though, is based on genetic mutations found in human cancer samples.

Mutations in two genes -ARID1A and PIK3CA — were previously unknown to cause cancer. “When ARID1A is less active than normal and PIK3CA is overactive,” Magnuson said, “the result is ovarian clear cell carcinoma 100 percent of the time in our model.”

The research also showed that a drug called BKM120, which suppresses PI3 kinases, directly inhibited tumor growth and significantly prolonged the lives of mice. The drug is currently being tested in human clinical trials for other forms of cancer.

The work, published in the journal Nature Communications, was spearheaded by Ron Chandler, PhD, a postdoctoral fellow in Magnuson’s lab. Chandler had been studying the ARID1A gene — which normally functions as a tumor suppressor in people — when results from cancer genome sequencing projects showed that the ARID1A gene was highly mutated in several types of tumors, including ovarian clear cell carcinoma. Chandler began researching the gene’s precise function in that disease and found that deleting it in mice did not cause tumor formation or tumor growth.

“We found that the mice needed an additional mutation in the PIK3CA gene, which acts like a catalyst of a cellular pathway important for cell growth,” Chandler said. Proper cell cycle regulation is crucial for normal cell growth. When it goes awry, cells can turn cancerous.

“Our research shows why we see mutations of both ARID1A and PIK3CA in various cancers, such as endometrial and gastric cancers,” Chandler said. “Too little expression of ARID1A and too much expression of PIK3CA is the perfect storm; the mice always get ovarian clear cell carcinoma. This pair of genes is really important for tumorigenesis.”

Magnuson’s team also found that ARID1A and PIC3CA mutations led to the overproduction of Interleukin-6, or IL-6, which is a cytokine — a kind of protein crucial for cell signaling that triggers inflammation. “We don’t know if inflammation causes ovarian clear cell carcinoma, but we do know it’s important for tumor cell growth,” Chandler said.

Magnuson added, “We think that IL-6 contributes to ovarian clear cell carcinoma and could lead to death. You really don’t want this cytokine circulating in your body.”

Magnuson added that treating tumor cells with an IL-6 antibody suppressed cell growth, which is why reducing IL-6 levels could help patients.

Although this research is necessary to find better cancer treatments, Magnuson and Chandler say that their finding could open the door to better screening tools.

“If we can find something measurable that’s downstream of ARID1A — such as a cell surface protein or something else we could tease apart — then we could use it as a biomarker of disease,” Chandler said. “We could create a way to screen women. Right now, by the time women find out they have ovarian clear cell carcinoma, it’s usually too late. If we can find it earlier, we’ll have much better luck successfully treating patients.”