Resistance to chemotherapy is a major reason that patients with the most malignant form of ovarian cancer do not have a good chance of survival. Now researchers have discovered a biomarker that should improve prospects for patients by indicating how their bodies are likely to react to chemotherapy.
chemotherapy room

While many women diagnosed with advanced ovarian cancer respond to chemotherapy at first, most eventually relapse. 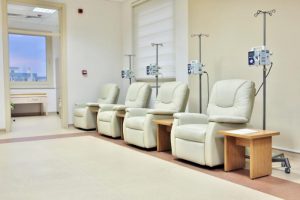 While many women diagnosed with advanced ovarian cancer respond to chemotherapy at first, most eventually relapse.

The researchers, who report their findings in the British Journal of Cancer, suggest the discovery of the biomarker could lead to better treatment options for patients with high-grade serous ovarian cancer (HGSC).

Many women diagnosed with advanced ovarian cancer respond at first to chemotherapy, but most relapse.

One approach that is showing promise in improving treatment options for ovarian cancer, is immunotherapy. This approach spurs the patient’s own immune system to join the fight against the cancer.

For example, in 2013, researchers at the University of Pennsylvania reported how a trial of a new personalized immunotherapy – when combined with chemotherapy – showed benefit in 75% of women with advanced ovarian cancer.

For their study, the researchers built on previous work where they had shown resistance to chemotherapy in the HGSC form of ovarian cancer was affected by gene changes involving a protein called NF-KB.

The protein controls transcription of DNA and plays an important role in inflammation, immunity, cell proliferation and differentiation.

The researchers set out to investigate the “crosstalk” between the micro-environment of the cancer cells inside the tumor and the cancer cells themselves. They were particularly interested in factors that might influence NF-KB signaling and cause different responses to chemotherapy in patients with HGSC.

In the first part of the study, the team examined the expression of 184 inflammation-related genes in samples of over 30 HGSC frozen tumor tissue held in tumor banks. Around half of the tumors had resisted and half had responded to chemotherapy.

The researchers found that 11 of the genes were differently expressed in the chemoresistant and the chemosensitive tumors, the most significant of which was a gene coding for a protein called STAT1.

In a second part of the study, the team used tumor samples from an independent cohort of 183 HGSC ovarian cancer patients (52 of whom were resistant and 131 were sensitive to chemotherapy) to validate their finding that STAT1 was a significant biomarker that could distinguish the two groups.

The study used cutting-edge technologies to identify the biomarker. The findings are currently undergoing further validation in cohorts of over 500 ovarian cancer patients, the researchers note.

Ovarian cancer is a leading cause of gynecological cancer-related deaths in women. Every year, the disease claims 152,000 lives globally.

While treatments have improved in the last 20 years, the pace is slow. When found early, the disease can be highly treatable, but unfortunately, because only a minority of cases are spotted early, most patients are left with a bleak prognosis. And while many respond to first-line chemotherapy, most develop resistance and then relapse.

The researchers believe that a major impact of their discovery is that using the biomarker, gynecologic oncologists will be able to predict which immunotherapy treatments are most likely to boost individual patients’ chances of successful response to chemotherapy.

Lead author Madhuri Koti, assistant professor in the department of biomedical and molecular science at the Queen’s University School of Medicine in Kingston, ON, Canada, explains there are different therapies that boost anticancer immunity and:

“Such therapies would prove to be most effective when coupled with markers predicting a patient’s eventual response to a specific therapy.”

Meanwhile, Medical News Today recently learned of new research from the University of Warwick, UK that showed how a compound found in nettles and ants boosted a cancer drug’s ability to shut down tumor cells. The researchers said it was particularly effective in ovarian cancer.