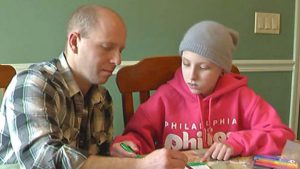 Paige gets help from her father Shane on her schoolwork. (MyFoxPhilly.com)

Hundreds of residents in a Pennsylvania town turned out for a “Shave-A-Thon” to honor an 11-year-old girl who is battling ovarian cancer.

Paige LaRosa started having discomfort and cramping in January, and could feel lumps in her stomach, MyFoxPhilly.com reported. Her parents decided to have her ovaries removed after her diagnosis in February, but the cancer remains.

“It’s been hard. I never thought it would come to this. I mean, I just felt bumps when I lay back,” Paige told MyFoxPhilly.com.

She’s since had two surgeries to remove the tumors and her ovaries, and has had two of her four rounds of chemotherapy.

The firehouse where Shane formerly worked is hosting the “Shave-A-Thon,” and all of the money raised will go to Paige.

“We want to show her it’s okay. It’s okay to be bald,” Warrington Fire Dept. Chief Mike Bean told MyFoxPhilly.com. “This is all about Paige. Give her something to put a smile on her face.”

Paige and her family are touched by her community’s kindness and support.

“It’s just so cool to hear that more than 500 people are coming to the firehouse to shave their heads for me,” Paige told the news station.