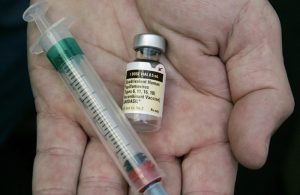 FILE – In this Aug. 28, 2006 file photo, a doctor holds a vial of the human papillomavirus (HPV) vaccine Gardasil in his Chicago office. A national estimate suggests that nearly half of U.S. men have mostly silent infections caused by the sexually-transmitted human papilloma virus, and that 1 in 4 has strains linked with several cancers. The study was released Thursday, Jan. 19, 2017. (AP Photo/Charles Rex Arbogast, File)

By Jana Jones
(WFLA) – Children attending public school in Florida may soon be required to be vaccinated for HPV.

State Sen. José Javier Rodríguez (D-Miami) recently introduced the “Women’s Cancer Prevention Act,” which would require all 11 and 12-year-old boys and girls in Florida schools to receive a vaccine for the human papillomavirus (HPV), a sexually transmitted virus, which can cause cervical cancer.

Two FDA-approved vaccines, Gardasil and Cevarix, which are designed to protect against the virus, came out more than a decade ago, and have since become a hot political topic. While many parents are for the vaccines, others are threatening to pull their children from public schools if they become mandatory.

“They are not a medical facility so they have absolutely no right to dictate it [whether children get vaccinated], they’re about education,” said Cindy Drummond, a parent who says she was warned of the vaccines’ risks.

“Other things can happen when you are required to take these shots because I would love for them to be vaccinated for it but not at the risk of it causing something else. I really haven’t been educated enough on it I just know my pediatrician is smarter than me about it and she said absolutely not.”

Dr. Karalee Kulek-Luzey, a pediatrician, recommends all students get the shot.

“This is a very important vaccine because we see this as one very big step to protecting our families from a cancer diagnosis,” said Kulek-Luzey. “When we talk about genital cancer, it is not just about female cervical cancer. males and young men can be at risk for this disease also. When you think about trying to stop a disease, the best way is to really attack every link in that chain.”

If the bill passes, students would be required to get vaccinated before the start of the 2018-2019 school year.

“I don’t think it will pass, I can’t imagine they’re going to require that and I think a lot of kids will be pulled out of school if they do,” said Drummond.

Time will tell what happens with the bill but doctors believe the vaccine is effective.

“We’ve really already seen a drop in the number of cervical cancer cases in our young adults that they feel is really directly related to this vaccine,” said Kulek-Luzey.