By Denise Grady and Jan Hoffman

The HPV vaccine, which prevents cervical cancer and other malignancies, is now approved for men and women from 27 to 45-years-old, the Food and Drug Administration said on Friday.

The vaccine is Gardasil 9, made by Merck, and had been previously approved for minors and people up to age 26. 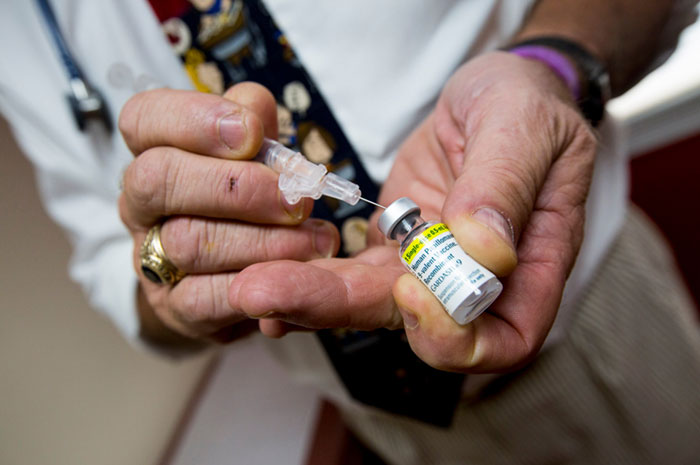 About 14 million women and men become infected with the human papillomavirus each year in the United States, according to the Centers for Disease Control and Prevention.
Credit: Keith Bedford/The Boston Globe, via Getty Images

It works against the human papillomavirus, HPV, which can also cause genital warts and cancers of the vulva, anus, penis and parts of the throat. The virus has many strains. It is sexually transmitted, and most adults encounter at least one strain at some point in their lives. The vaccine protects against nine strains, including those most likely to cause cancers and genital warts.

“Today’s approval represents an important opportunity to help prevent HPV-related diseases and cancers in a broader age range,” Dr. Peter Marks, director of the F.D.A.’s Center for Biologics Evaluation and Research, said in a statement.

The approval was based on a study in women ages 27 to 45, showing that an earlier version of the vaccine was highly effective in preventing persistent HPV infection, genital warts, vulvar and vaginal precancers, cervical precancers and cervical cancers related to the virus types covered by the vaccine.

The vaccine’s effectiveness in men ages 27 to 45 is inferred from the data in women, from its efficacy in younger men and from evidence that it created immunity in a study of men 27 to 45-years-old.

The most common side effects of the vaccine include soreness at the injection site, swelling, redness and headaches.

If a person has already been exposed to a particular strain of HPV, the vaccine will not work against that strain. For that reason, vaccination has been strongly recommended for young people before they become sexually active.

But even someone who has already been exposed to a few strains — but not to all nine in the vaccine — can still gain protection against the strains they have not encountered.

“This is great,” Dr. Lois M. Ramondetta, a professor of gynecologic oncology at MD Anderson Cancer Center in Houston, said in an interview. “It’s a prevention vaccine. The best time to get it is before you turn 13 and have any intimate activity at all. But, that said, it protects against nine types of HPV, so if you have one of the types, you still can be protected from other HPV types.”

She added: “There is a whole generation of people we were missing who didn’t know about it. Doctors weren’t good at talking about it.”

She and Dr. William Schaffner, an infectious disease expert at Vanderbilt University, said people over 26 began asking doctors about the vaccine. Some were leaving marriages or monogamous relationships, expected to begin dating and realized they might be exposed to the virus.

“They want to feel protected to some extent,” Dr. Ramondetta said. “Now they have the opportunity.”

Dr. Ramondetta noted that tumors affecting part of the throat — called oropharyngeal cancers — caused by HPV are rising, particularly in men. The vaccine is believed to help prevent them.

Dr. Schaffner said a panel that advises the Centers for Disease Control and Prevention has already been discussing the data on using the vaccine in older people, and is expected to make a recommendation about it. The recommendation could be universal, meaning that everyone in that age range should receive it, or it could be “permissive,” meaning that the decision is up to doctors and patients.

Once that group, the Advisory Committee on Immunization Practices, recommends a vaccine, insurers generally cover it.