Researchers trying to develop a diagnostic tool for ovarian cancer are hoping dogs’ keen sense of smell will lead them down the right path.

An early detection device that combines old-fashioned olfactory skills, chemical analysis and modern technology could lead to better survival rates for the disease, which is particularly deadly because it’s often not caught until an advanced stage. 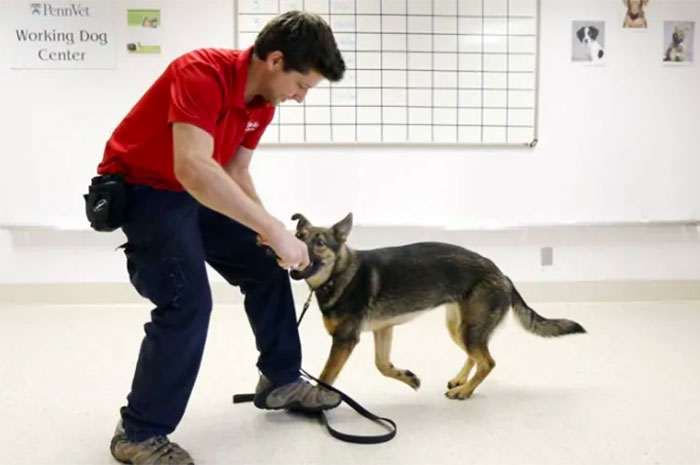 If dogs can isolate the chemical marker of ovarian cancer, scientists at the Monell Chemical Senses Center will work to create an electronic sensor to identify the same odorant. (Matt Rourke/Associated Press)

Using blood and tissue samples donated by patients, the University of Pennsylvania’s Working Dog Center has started training three canines to sniff out the signature compound that indicates the presence of ovarian cancer.

If the animals can isolate the chemical marker, scientists at the nearby Monell Chemical Senses Center will work to create an electronic sensor to identify the same odorant.

“Because if the dogs can do it, then the question is, Can our analytical instrumentation do it? We think we can,” Monell organic chemist George Preti said.

More than 20,000 Americans, and some 2,600 Canadians, are diagnosed with ovarian cancer each year. When it’s caught early, women have a five-year survival rate of 90 per cent. But because of its generic symptoms — weight gain, bloating or constipation — the disease is more often caught late.

About 70 per cent of cases are identified after the cancer has spread, said Dr. Janos Tanyi, an oncologist whose patients are participating in the study. For those women, the five-year survival rate is less than 40 per cent, he said.

The Philadelphia researchers will build on previous work showing that early stage ovarian cancer alters odorous compounds in the body. Another study in Britain in 2004 demonstrated that dogs could identify bladder cancer patients by smelling their urine.

Dr. Leonard Lichtenfeld, deputy chief medical officer for the American Cancer Society, said while the canine concept has shown promise for several years, there haven’t been any major breakthroughs yet.

“We’re still looking to see whether something could be developed and be useful in routine patient care, and we’re not there yet,” said Lichtenfeld, who is not involved in the study.

Cindy Otto, director of the Working Dog Center, hopes to change that with the help of McBaine, a springer spaniel; Ohlin, a Labrador retriever; and Tsunami, a German shepherd.

“If we can figure out what those chemicals are, what that fingerprint of ovarian cancer is that’s in the blood — or maybe even eventually in the urine or something like that — then we can have that automated test that will be less expensive and very efficient at screening those samples,” Otto said.

Ovarian cancer patient Marta Drexler, 57, is heartened by the effort. Drexler describes herself as a textbook case of the disease not being detected early enough because she had no symptoms.

After two surgeries and two rounds of chemotherapy, Drexler said she didn’t hesitate when Dr. Tanyi, her physician, asked her to donate tissue to the study. Last week, she visited the Working Dog Center to meet the animals whose work might one day lead to fewer battles like hers.

“To have the opportunity to help with this dreadful disease, to do something about it, even if it’s just a tiny little bit of something, it’s a big thing,” said Drexler, of nearby Lansdowne.

The ovarian cancer detection study is being funded by an $80,000 grant from the Madison, N.J.-based Kaleidoscope of Hope Foundation.