By Amy Marturana | Self Magazine 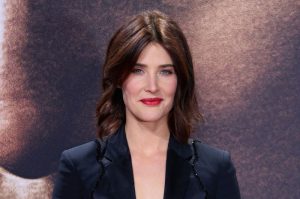 In today’s Lenny Letter, actress Cobie Smulders shared her experience of being diagnosed with ovarian cancer when she was 25. After multiple surgeries, and a big lifestyle overhaul, the How I Met Your Mother star came out on the other side with a clean bill of health and her fertility intact—she has since given birth to two girls. While getting ovarian cancer at such a young age is rare, it’s not impossible. Luckily, the prognosis is usually better than if you get this type of cancer when you’re older.

According to the American Cancer Society, more than 22,000 new cases of ovarian cancer will be diagnosed this year, and more than 14,000 women will die from it. It’s the fifth leading cause of cancer death in women. The most common type of ovarian cancer usually occurs in older women, age 63 and up. It’s typically diagnosed at a late stage, and is usually very hard to treat. “Twenty-five is generally outside the typical age of most ovarian cancers, but there are certain types of ovarian cancers that can occur at an early age,” Nimesh Nagarsheth, M.D., associate professor of obstetrics, gynecology, and reproductive science at the Icahn School of Medicine at Mount Sinai, tells SELF.

The type of ovarian cancer a 25-year-old would get is likely to be one of the more uncommon, but more treatable, types, Douglas Levine, M.D., director of gynecologic oncology at NYU Langone’s Perlmutter Cancer Center, tells SELF. “There are some very rare forms that do occur in young women and are very aggressive, but those are even more rare,” he says.

Ovarian cancer can be very hard to detect, but there are some common indications.

Smulders writes that before she was diagnosed, something just felt off, so she went to her gynecologist to get checked out. Her symptoms included low energy, fatigue, and constant pressure in her abdomen. Levine says that this is one common symptom of ovarian cancer. The list also includes pelvic pain, bloating, painful periods, frequent urination, constipation, and change in bowel or bladder habits. The problem is that these can be symptoms of so many other conditions. “They’re not so specific, so therefore they’re not that helpful,” Levine says. “These might be normal symptoms a person gets with her period every month.”

So how can you tell if your symptoms might signal something more serious? “If they’re getting worse and not getting better, and if they last for approximately two weeks, that’s when someone should seek medical attention,” says Levine. You don’t need to be alarmed if you experience these symptoms intermittently—we all do—but if they’re getting worse and are persistent, then it’s worth looking into.

The reason symptoms of ovarian cancer are notoriously easy to miss is twofold. First, the ovaries are intra-abdominal organs, “which means they can get quite big before they cause a lot of problems because there’s a lot of space in the abdominal cavity for things to move around,” says Nagarsheth. “It’s not until it gets quite large or the cancer spreads to an organ that’s more symptomatic that you notice signs of ovarian cancer.” The classic type of ovarian cancer spreads fast once it starts growing, reaching other nearby organs like the intestines, bladder, diaphragm, and liver pretty quickly. Levine says that the subtypes that tend to occur more in young women are usually slower spreading, so there’s a better chance doctors can catch it before it’s impacted other parts of the body.

The other reason ovarian cancer is often missed is that there are no good ways to test for it. “A lot of experts are trying to develop good screening tests, there’s a lot of effort and research in this area, but it has not come to fruition,” Nagarsheth says. He adds that sometimes women who receive testing get a false sense of security, which is part of the reason doctors don’t regularly screen for it. Some physicians may do a vaginal ultrasound or blood test to feel like they’re doing something. “But in actuality, this has not been helpful and often leads to unnecessary testing, procedures, complications, and also that false sense of being protected because they were screened,” says Nagarsheth. This lack of effective screening is why women who have the BRCA mutations that indicate an extremely high ovarian cancer risk are encouraged to remove their ovaries after they’re done having kids or by age 40, Levine says.

Though treatment for ovarian cancer can impact fertility, some women will still be able to have children.

Doctors were able to remove Smulders’ cancer with multiple surgeries. Levine says that for young women, doctors will try to treat them in a way that preserves their fertility. “Since many of these [cancers] are ‘favorable,’ they can be treated with surgery alone. That’s common in this age group.” But for some women, chemo and even potentially removing the ovaries are necessary steps to rid them of cancer, which often—but not always—means having children is off the table. “Long-term, aggressive chemotherapy regimens can impact ovarian function and can put patients into menopause at an early age,” notes Nagarsheth. Doctors will do their best to balance fertility preservation with treating cancer. Sometimes, it may even be an option to retrieve eggs before treatment to use later.

In addition to Western medicine, some patients may want to explore complementary medicine to assist treatment. Smulders says she tried everything she could, from yoga, to acupuncture, to even visiting energy healers “who evaporated black smoke from my lower body.” Doctors say that as long as these types of additional treatments aren’t used in place of traditional treatment, and don’t interfere with treatment, there’s no harm in giving them a try.

Here’s the one thing that might be better to skip: “I went to a cleansing retreat in the desert where I didn’t eat for eight days and experienced hunger-driven hallucinations,” writes Smulders. “I’d be careful about that,” says Nagarsheth. “[Fasting for eight days] is generally not recommended, and can potentially start to harm the healing process.”

Healthy lifestyle choices can help a woman fight ovarian cancer—or lower her risk for developing it in the first place.

What both Nagarsheth and Levine agree with is Smulders’ commitment to eating healthier after her diagnosis. The actress says she switched to a raw diet, and gave up cheese and carbs. There are no studies that say a raw diet will help fight cancer, but she’s got the right idea. “There’s no evidence that one specific change in nutrition will help any individual fight their cancer,” says Levine. “However, maintaining a healthy lifestyle and diet and maintaining a healthy weight allows you to receive proper treatments and reduces risk factors of all cancers and cancer reoccurrences.”

These healthy lifestyle choices can also help prevent cancer, broadly speaking. With regard to ovarian cancer in particular, one known way to lower your risk is by taking the Pill. Taking the Pill for five years or more can reduce the risk of ovarian cancer by 50 percent. “That’s not to say everyone that takes the Pill won’t develop it,” Nagarsheth says. “But it is a very protective form of medicine that’s out there.”

Source: Self Magazine – Cobie Smulders Had Ovarian Cancer At 25—Here Are The Symptoms You Should Know