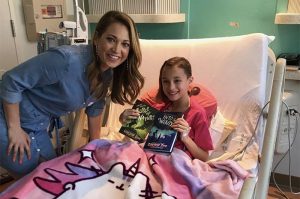 Kaylee Tolleson captured the hearts of many people, including Chief Meteorologist Travis Herzog, when she came to the ABC13 studios in April.

“When life hits you, track the weather.” That’s what Kaylee, who wants to be a meteorologist, told Travis.

Travis learned that Kaylee had been diagnosed with stage III ovarian cancer just days before her visit to our studios.

He snapped a picture with her and shared it on social media asking people for prayers.

“Prayer warriors, please lift up Kaylee. This precious girl starts chemo treatments tomorrow for stage III ovarian cancer. Her motto is, “When life hits you, track the weather.” I look forward to helping her do that during the battle ahead and even more so after she conquers it,” Travis wrote.

Not long after Kaylee’s visit to ABC13, “Good Morning America’s” Ginger Zee surprised Kaylee in the hospital during her third day of chemo.

Kaylee made her GMA debut talking about her fight against the disease.
“Yes. I’ve been fighting ovarian cancer. And yes. I know not many people know about it in young girls. But it can happen. That’s why I’m trying to raise awareness for it,” Kaylee said.

Kaylee just finished her fourth round of chemotherapy.

“Hopefully, when I get my CT and MRI scan, it will show no evidence of disease and that I will be cancer free,” Kaylee said.